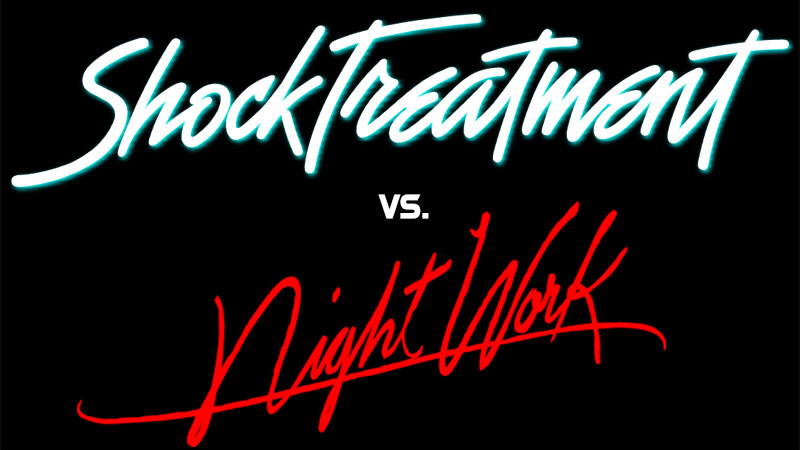 It has been said that artists are often directly (or indirectly) inspired by the ingénues or eras that precede them; borrowing the style, images, and sounds they grew up with. Arguably, Rihanna has been said to mirror a few avant garde flavorings handed down by Grace Jones…whereas Lady Gaga has been shown to embody some of the gritty, NYC new-wave looks sported by Dale Bozio of Missing Persons. While it’s hard for me to pin down the 70s/80s equivalent I find prevalent in the sound of the Scissor Sisters’ discography, I feel as though their latest album, “Night Work,” and associated web art direction is reminiscent of the ’81 film, “Shock Treatment.”

Maybe some similarities? Or perhaps I’m just projecting my own sick, twisted, agenda for the next Scissor Sisters video to be a recreated (inspired) mélange of various neon-laden scenes from “Shock Treatment?” It seems as though Scissor Sisters have already been able to recreate some of the kitschy graphical elements in their own viral Scissor Sisters TV YouTube videos – genius!

Similar to Scissor Sisters band members, Janet’s character in “Shock Treatment” is also familiar with the pitfalls of fame and fashion. The film is often referred to as “not the sequel, not the prequel, but the equal” to its sister, “The Rocky Horror Picture Show.” This film was very much ahead of its time by exploiting the harsh world of reality television. We now live in the world that the creators of “Shock Treatment” inevitably saw looming in our future. Everything about this film is smart – from the great costume and set design to the musical lyrics, filled with biting satire of a modern culture.

There is so much graphic stimuli in “Shock Treatment,” it would not surprise me that the creative art director behind the “Night Work” album may just have been inspired by some of the film’s aesthetic sensibilities. Or, perhaps this is just the normal cycle of bringing back some retro design flavor from the past. Exploiting a time when we were just beginning to converge on a digital age of automated luxury items, and the resulting over-commercialization of those products via electronic communication may have been prevalent for early 80s films like “Shock Treatment”. Yet, in a time when we’re plagued with technology and annoying bombardment of reality TV characters we could really care less for, it’s fun to see Scissor Sisters poke fun at today’s culture; almost like getting a big glittery pie of sequins launched right into the face of society.

You may or may not agree with some of the graphic, or stylistic, similarities pointed out below. However, if you’re a fan of Scissor Sisters and haven’t seen “Shock Treatment”…I’d highly recommend watching the film. I like to think of Scissor Sisters as a band of misfits dripping with sex and attitude, much like the motley crew that make up the cast of “Shock Treatment”. Scissor Sisters have always tapped into past elements that encapsulate 70s/80s pop culture – I just happen to have fun comparing two of my (many) favorite things that inspire me to create!

Think it’d behoove Scissor Sisters to perform a cover of “Lookin for Trade” – why not?